As darkness fell and a thick Pacific fog crept in over the Point Reyes peninsula on Sunday, a small band of animal activists waited for a National Park Service official to leave his check-post along Pierce Point Road.

He was there to prevent people from going deep into the National Seashore, where forests are aflame, and a skeleton crew of park service employees are otherwise tending to a 3,000-acre conflagration burning at the park’s southern end.

At 6 p.m., as his shift came to a close and he drove away, the small bucket-brigade crept in. They were transporting roughly 150 gallons of water to the park’s tule elk, who they say are dying from dehydration — and unable to reach other water sources because of a fence around their preserve — as drought conditions worsen in the region.

“If the park service refuses to care for the animals that they are mandated by law to preserve, then others have to step in,” said Fleur Dawes, the communications director for the San Rafael-based organization In Defense of Animals.

Until this week, Dawes’ organization and other local activists were the main ones focused on the plight of this year’s elk herd. But on Monday, a group with a track record of aggressive environmental litigation, the Center for Biological Diversity, urged the park service to provide water to the elk and remove an 8-foot-high wire fence that runs across the peninsula, preventing the free movement of the elk.

“Unlike the privately owned cattle that have unrestrained access to water sources in this area, the elk are protected by federal law that requires the Park Service to ‘conserve’ them for the public and future generations,” Katherine Meyer, director of Harvard Law School’s Animal Law & Policy Clinic, said in a statement for the organization. “They should not be denied access to the water they need to survive.”

The conflicting needs of the elk preserve and neighboring dairy ranches have long been a flash point in Point Reyes, one of California’s most beloved seashores. The latest confrontation comes at a time when the park service is considering a final decision on a management plan for the elk — a plan that has pitted the 24 family dairy and beef operators, who lease land in the national park, against animal and environmental activists, who say their operations don’t belong there.

Tule elk are known to be relatively resilient to drought conditions, which is one reason national park biologists and others are reluctant to intervene this year.

“While the stock ponds left from the prior ranching days are frequented by elk … these ponds actually go dry in most years,” Carey Feierabend, acting superintendent for Point Reyes National Seashore, said in a statement, noting that there “are a number of seeps and springs in the area that are frequented by the elk.”

The Tomales Point herd consists of 450 elk, fenced into a 2,000-acre reserve that, perched on the northern end of the peninsula, offers sweeping views of the Pacific, Bodega Bay and Tomales Bay.

During a previous drought that ended in 2014, the herd lost about half of its population, said National Park Service wildlife ecologist Dave Press, who lives in the area and watches over the elk pack.

Since Aug. 23, Dawes said her group’s scouts have observed at least a half-dozen dead elk in the park.

Press said he understood the activists’ concerns, and has been checking on the herd every week. He said that while he observed the elk had enough water, the National Park Service has plans to put in troughs filled by water trucks if necessary.

He was disheartened to hear that activists had brought in water and entered the closed park without permission.

“That’s a total violation of working within the realm of the national parks,” he said. “This is public land, and we would have to issue a permit for anything like that. Just speaking hypothetically, what if they put that trough on one of our endangered plant species? How would they even know that?”

One of the ponds the elk regularly drink from was observed dry last Friday afternoon. Hoof prints pocked the surface of the now-muddy pond. A small herd of elk and a solitary deer rested on the dry, grassy hill above.

But the situation is complicated by the nearby Woodward fire, the result of a lightning strike on Aug. 18. Though it still remains about nine miles away from where the elk roam at Tomales, it is closer to one of the free-range herds and has led to heavy smoke in the area, along with evacuation orders and warnings.

More than 400 firefighters, many from the park service, are battling that blaze, trying to set containment lines in terrain that, in some places, has no recorded history of burning, leaving it heavy on fuel. Other places are steep and wild, making access difficult.

Over the past few days, it has been difficult to discriminate smoke from fog, as both cloud the area, making aerial water drops nearly impossible.

Before the Point Reyes National Seashore was officially established in 1972, the land was privately owned by ranch families. For nearly a decade after Congress authorized the park in the 1960s, the government worked to buy those parcels with agreements to allow the ranchers to continue operations for decades, sometimes up to 30 years.

Many of those farms, founded by Irish, Swiss and Portuguese immigrants, were part of a dairy industry that sprang up as the Gold Rush increased milk demand in nearby San Francisco, said author Dewey Livingston, who has written about the area’s agriculture and is a former historian for the park.

Though elk herds had long roamed the area, they were wiped out as hunting decimated their numbers and grazing herds of cattle took over.

In 1978, conservationists moved some of the last tule elk in the state back to the northern tip of the park at Tomales Point in an attempt to save them from extinction. They were successful, and the “elk population grew and grew and grew,” Livingston said. 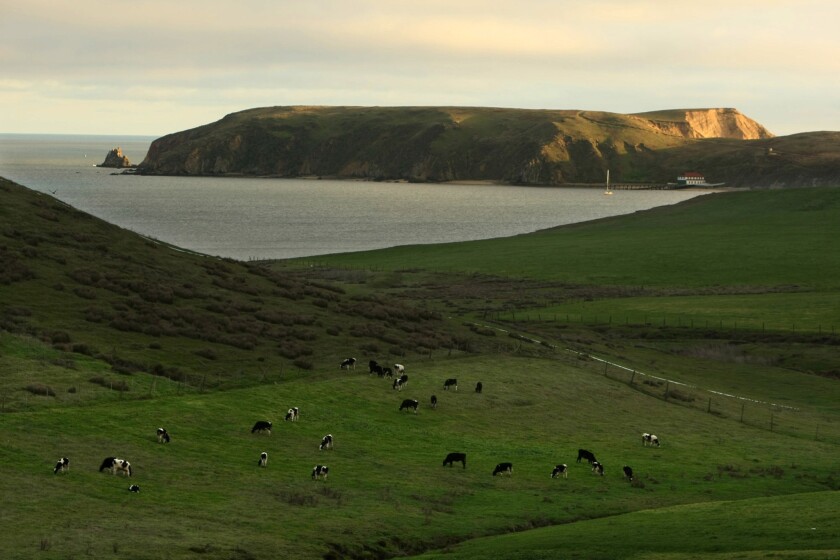 Environmentalists, the National Park Service and ranchers have reached a settlement over disputed usage rights at Point Reyes National Seashore.

But elk began pushing onto the better grazing lands of the farms, where appetizing pastures beckoned despite fences and other deterrents, causing “conflict with the dairy families,” Livingston said.

An 8-foot-high woven-wire fence now runs across the peninsula, preventing the Tomales herd from moving onto neighboring ranches.

Amid debates over extending their leases, ranchers would like to see the number of elk reduced. The proposed Park Service plan calls for culling some herds to keep them at a size that can coexist with the farms.

Kristin Denryter, coordinator of the Elk and Pronghorn Program at the California Department of Fish and Wildlife, said that the elk have no natural predators in Point Reyes, and the state agrees they may need to be culled as the herds continue to grow.

“We think the science is sound,” she said. “The landscape basically can’t support them.”

As the NPS prepares to release its final plan for managing the area and its wildlife, some see the bucket brigades as a public relations stunt to draw attention to the ranch agreements.

“The portrayal of these folks as greedy, industrial ranchers benefiting on the federal government dime is I think a big exaggeration,” said Livingston, pointing out that the majority of the farms have been run by generations of the same family.

Isabel French, spokeswoman for the Marin Agricultural Land Trust, which represents family farms, though not those in the park, said the county’s agricultural economy depends on the Point Reyes ranches. They help support auxiliary services such as veterinarians and transportation services, she said.

The activists, however, see the fence and the proposed culling as an abnegation of the park service’s duty to protect the iconic species, which once numbered in the hundreds of thousands across Central California.

And they see the park service’s refusal to provide water as evidence that officials are more concerned with the needs of ranchers than elk.

“This is a ridiculous situation,” said Dawes, as she guided a team from The Times along an animal trail, pocked with hoof prints and paw marks, toward one of the dried ponds. “There are more cows in this park than there are tule elk in the entire world.”

On Thursday, two days after The Times published this report online, Press visited the preserve in fog so thick the moisture drenched his clothes.

By 10:30 a.m., he had checked two streams and found water flowing in both, with signs of elk trails crossing them, he said.

“There is honestly water everywhere I have looked,” said Press, adding that he saw five elk nearby. “You just have to know where to look.”

Check out this great article by experts from CHLPI, @HarvardFLPC, and @eatsfvoucher for an overview on how strengthening WIC could get more people access to nutritious foods: https://thehill.com/opinion/healthcare/559774-strengthening-wic-to-improve-health-a-prescription-for-change

Thrilled to announce an @HNMCP / @ABAesq joint release of a new report by @Deanna_Parrish: “Designing for Housing Stability,” providing best practices for eviction prevention and/or diversion programs, particularly during the pandemic. https://hnmcp.law.harvard.edu/designing-for-housing-stability/

Today we sued @NatlParkServlce on behalf of @ALDF and several California residents for allowing #tuleelk to die slow, preventable deaths at Point Reyes. The elk couldn’t get past a fence placed to stop them from competing for food and water with cattle. https://apnews.com/article/ca-state-wire-animal-rights-parks-travel-lifestyle-0954273933da397a37140bc2e8923d19